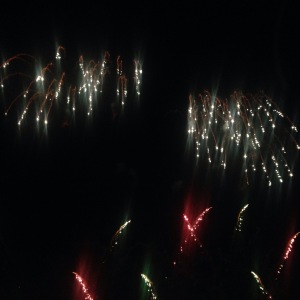 The weather may have been unseasonably mild but the Blackheath fireworks were as good as always. For us the real highlight of each year’s show is to see the village full of people, bars and restaurants packed and business booming. There’s also something strangely thrilling about being able to work up the middle of the Tranquil Vale free of traffic.

Anyway, back to the firework display and some highlights for us from last night:

– the final segment was pretty spectacular made all the more exciting for the fact that there was a brief pause beforehand which only served to build the anticipation (and to those of you who left thinking it had ended already, shame on you! We Radicals held firm).

– the music was a welcome addition and generally worked well, though it could probably have been even louder and under no circumstances should Coldplay ever be used again! It’d be fantastic to hear some classical music accompany the show next year.

– not really a highlight but it has to be said that the attempts by the women on the public announce system to warm up the crowd before the show lacked, erm, sparkle.

– the band playing outside the Crown afterwards were excellent – anyone know who they were?

And of course thanks are due to the volunteers, sponsors, the local police team (and those from further afield who came in to help) and Lewisham Council for making it happen. It seemed like there was a veritable army of stewards there this year – are thrre normally so many?

One reflection after the event: each year the fireworks see, apparently, around 80,000 people descend on the village for an unticketed event that lasts about 30 minutes start to finish – with many arriving just before and attempting to leave just after. Rightly this event is supported by the Blackheath Society, and others, who do a great job raising money for it.

Compare this to the opposition, including from the Blackheath Society, to the OnBlackheath concert. A ticketed event attended by around 25,000 people, mostly families, across two days which was well stewarded and could not have been more careful about litter and the like (there are never anywhere near enough bins at the fireworks). When you add to this the fact that there is normally a fair ground in town for the fireworks display (which it has to be said is pretty awful) then the contrasting attitudes to the two events is as confusing as it is capricious.

It will be interesting to hear what the reaction is to OnBlackheath at the post event public meeting this Thursday (6th November at the Greenwich Hotel). If the pre event meeting is anything to go by there could well be fireworks! Look out for our report.

6 thoughts on “Fireworks On Blackheath”