As we Radicals have noted there are plenty of restaurants to choose from in the village and we will try them out so you don’t have to (erm, is this right? Ed). Channelling the spirit of Michael Winner we visited BIANCO43 on 17 April. Opting for a seat near the bar we were impressed by the stonewashed white décor that gave the restaurant a suitably Mediterranean vibe. Add to this a discreet guitar player and it was a very pleasant atmosphere. 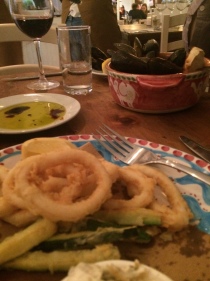 We had a few recommendations via the twitosphere (@blackheathrev) and A Radical went for the classic fried calamari and courgette. A simple dish done well, not too heavy on the frying but just crispy enough. It was light but possibly had a few too many calamari (although A Radical never-the-less polished them off!). B Radical went for a rather large bowl of mussels. Again simple and well done with just the right amount of garlic. We Radicals made a schoolboy error of selecting the wine before food so had a rather nice bottle of Montepulciano on the go and in hindsight a decent crisp white would have gone down nicely (Grecanico looked tempting). On the wine front the bottles were reasonably priced around £20-£30 but you could splash out for something closer to £50. There were a few wines by the glass although a bit pricey and as always it made more sense to go for a bottle, but this did limit our ability to mix and match with the food.

There was no feeling of being rushed. The restaurant was busy although the mezzanine level was not needed. We had plenty of bread to munch on and a decent gap between courses. The staff, we think all proper Italians, were incredibly friendly and knowledgeable – and chattered to each other in Italian which added to the authenticity!

Pizza was the order for the main course. A Radical went for the special which had mozzarella, spinach, cherry tomatoes and pepperoni. Sounded interesting and it all worked well together. B Radical was filled with the spirit of Napoli and went for a marinara – some would argue the original pizza with just tomato and a bit of garlic – and was suitably satisfied. Both came out of the pizza oven that has pride of place opposite the entrance. The pizzas were pretty big and we were too full for dessert so went straight for the digestive and espresso.

It may have been the size of the limoncello (a champagne flute’s worth!), the chilled guitar music, or the presence of Lenny Henry (he who sleeps on beds in public places) on the next table but we opted to stay for a cocktail. For the same price as a glass of wine (around £6) we thought they were pretty good value and the vodka martini worked a treat. Channelling the spirit of parents in the 80’s B Radical went for a Campari. That won’t happen again!

In all we Radicals were very impressed. The bill, including all drinks and gratuity was a very reasonable £84. The slightly bohemian and certainly relaxed vibe was just right (we particularly liked the lights strung out on blue wires that added a bit of colour). The bar area had a few seats for the casual drinker and pallets covered in various books to peruse. With the mezzanine level we Radicals mused that the bar area could be used primarily for drinkers and would certainly be successful. In all a pleasant evening and we really can’t understand why people would walk past and go to Strada! The only disappointment was stepping outside and realising we were not in Italy…

One thought on “Celebrities come dine with us – Bianco43 review plus Lenny Henry!”